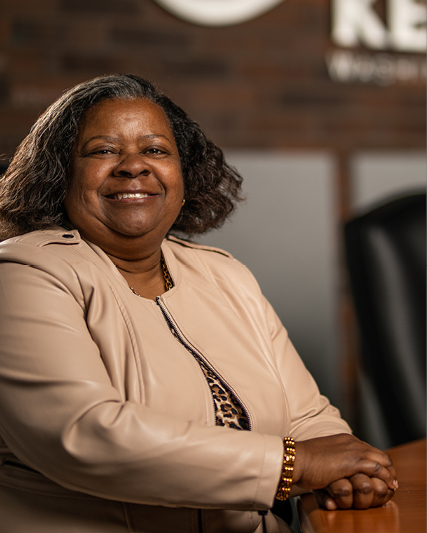 Growing up in a military family, Kent City Councilmember Brenda Fincher had the privilege of living in different places and meeting different people. This is one of the many things she loves about Kent – being around people from all over the world who have different cultures, beliefs and backgrounds.

Brenda moved to Kent in 1988 when she and her family were ready for a change. She raised her son and daughter in the Kent School District, with her children starting out at O’Brien Elementary, which was then in an industrial area. While her kids were in school, Brenda was president of several PTAs and is a two-time Golden Acorn Award recipient.

Her kids are grown now and have five kids of their own, who Brenda loves spending time with. Brenda works at Holy Spirit Parish in downtown Kent, but her community work doesn’t stop there. She has also volunteered for various organizations, including the following:

“When I was a growing up, my parents always volunteered in the community and started my brother and me off early. One of my favorites was being a candy striper in a convalescent home” explains Brenda. “You learn so much from others when you give back to the community.”

Brenda was drawn to serving on Kent City Council, because she thought that it was another platform from which to serve and where she could make the biggest difference. Brenda believes there are two sides to everything, and we have to think about what our neighbors are going through when making decisions.

Brenda, who describes herself as usually upbeat and positive, enjoys spending time with friends and family, camping, sewing, crafts, traveling and singing in the church choir.

“Kent is a marvelous and amazing place to live. We have so many cultures here, and you don’t get that everywhere,” says Brenda. “Just about anything you can think of is made in Kent, and there are so many things to see and do here.”