Whether you live in Kent and walk by them daily, or drive through Kent once in a while, our beautiful traffic signal control boxes are sure to get your attention.

Friendly walruses, octopi, and Orca whales read to each other outside the Kent Library at the intersection of 2nd Avenue and Smith Street. Vividly-hued salmon travel upstream along Meeker Street at 64th Avenue South. A collection of smiling, colorful clouds have taken up residence at Kent-Kangley Road and 132nd Avenue SE.

What began two years ago as a partnership between several City departments to deter graffiti and beautify the unsightly boxes that control traffic signals has resulted in eight new artworks located throughout the community. The first year of the project included five boxes, so there are now 13 art-wrapped boxes in total.

The project was first suggested by Kent Police Department staff as a mechanism to prevent graffiti on traffic signal controller boxes, which frequently serve as blank canvases for taggers. The Kent Arts Commission quickly came on board in 2017, offering to fund and spearhead the project. The Public Works Department jumped in to help with selecting frequently vandalized boxes and preparing them for the application of artwork.

“We saw this project as an opportunity to contribute artwork to highly visible streetscapes,” Suzanne Smith, Chair of the Arts Commission said.  “And the feedback from the first five boxes was so overwhelmingly positive, that continuing and expanding the project was an easy decision.”

The Arts Commission extended the opportunity to design a box to professional and emerging artists residing in Washington State. The artists could work in any medium, as long as the final artwork could be translated and digitally reproduced on a two-dimensional vinyl wrap. Forty applications were received, and eight artists were selected and commissioned to design artwork for different box locations. 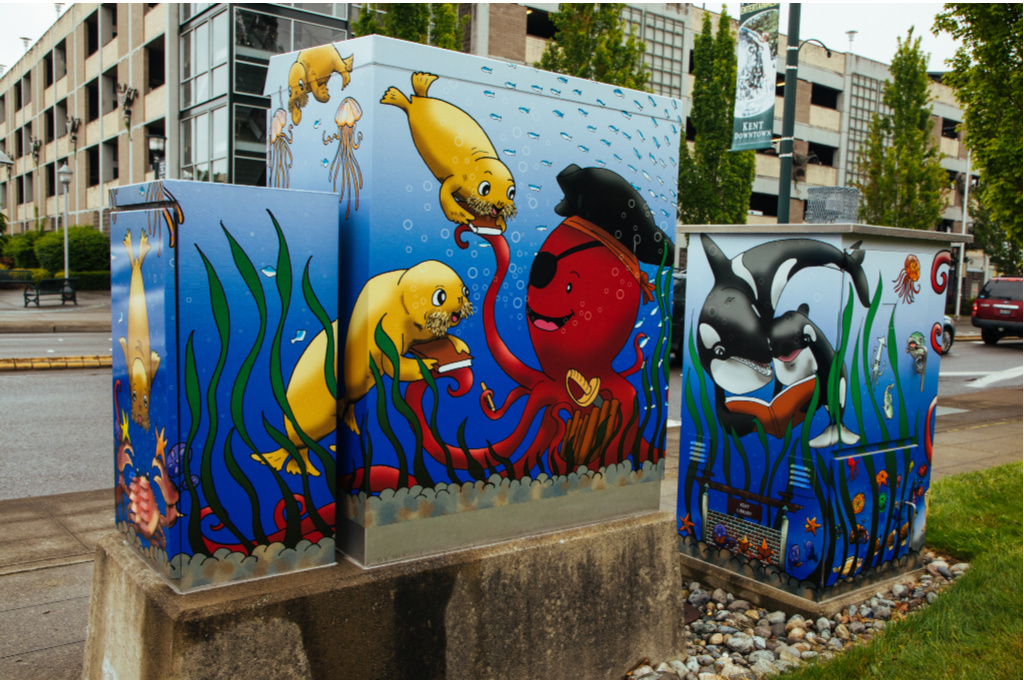 The graphic rhododendron flowers and trees that adorn the box at Central Avenue and Smith Street celebrate Kent’s many parks and trails. Artist Cecelia DeLeon also included seeds and small plant sprouts representing the abundance of produce that is shared among gardeners and with the nearby food bank.

The agricultural images that adorn the box at Military Road and Reith Road were originally a hand-tinted paper cut by Debbi Commodore. The imagery includes berries, hops, lettuce and other crops, signifying the agricultural history of Kent. 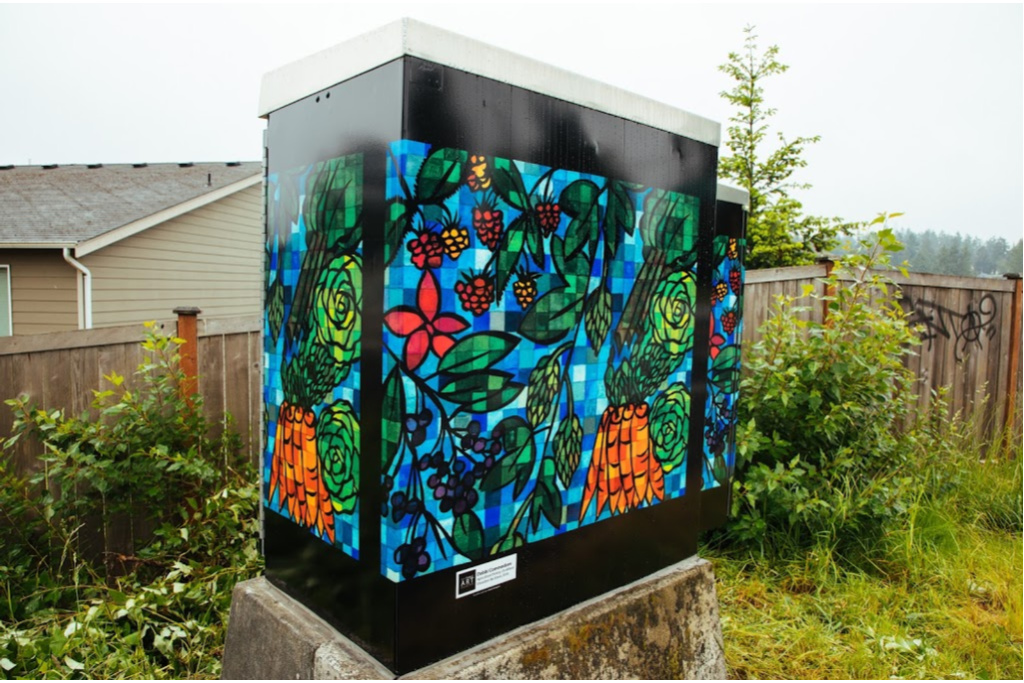 “The Illustrated Kent” at Washington Avenue and James Street was designed by participants in the Creative Art Space program, produced by Kent Parks, Recreation and Community Services Department’s Adaptive Recreation division. Creative Art Space is an inclusive program designed to bring out the artist in everyone. 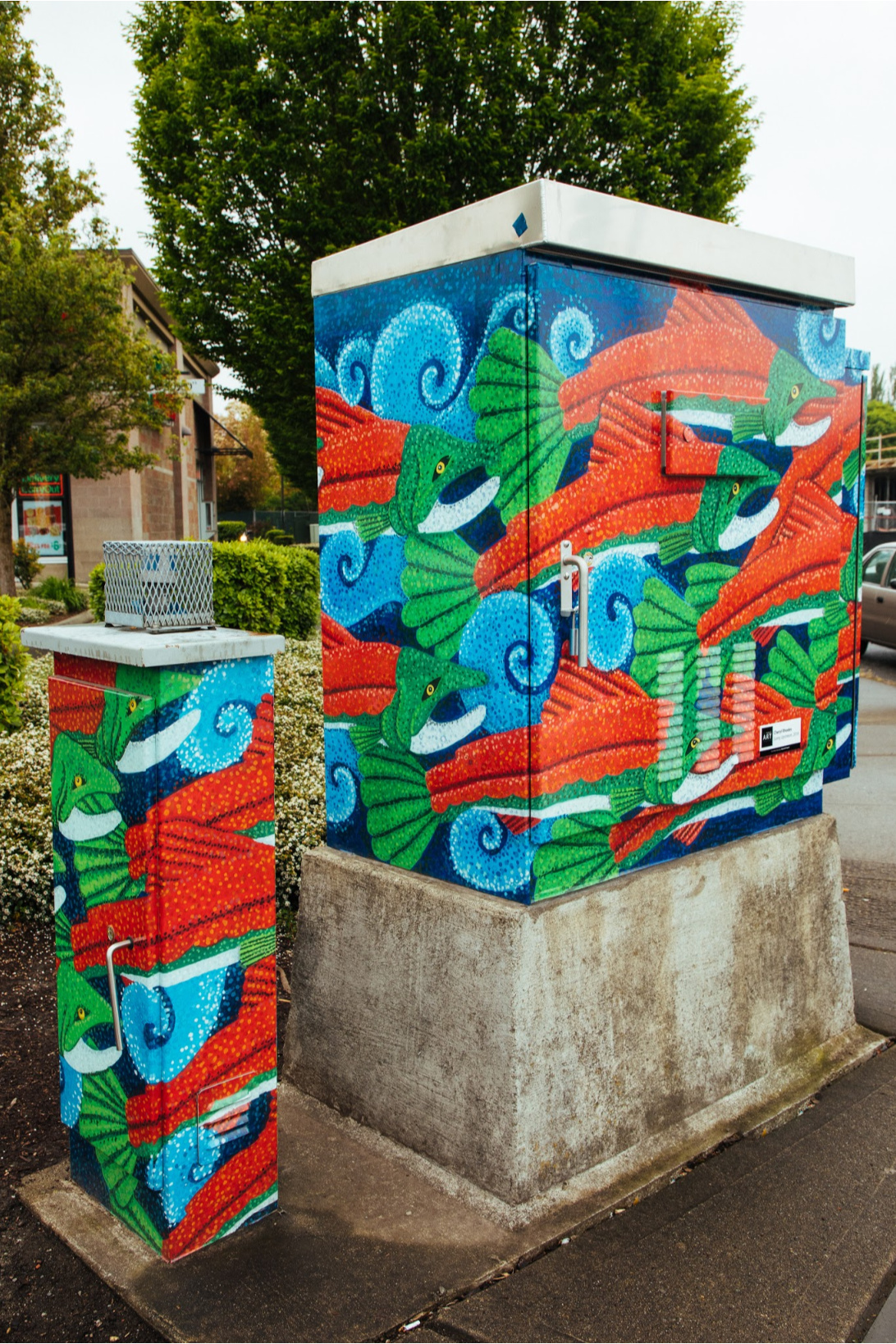 “Smile when it’s raining” by Ahmed Davis brings a cheerful twist to our region’s reputation for gloomy weather with multi-colored, grinning clouds on a box at 132nd Avenue SE and Kent-Kangley Road.

The head-turning installations transform their locations into outdoor galleries, giving drivers something bright and interesting to look at when they’re stuck in traffic and making passersby smile. Each artist brought a distinct style to their box, giving the project a range of themes and styles.

Response to the project has been very positive, with enthusiastic feedback across all ages and various segments of Kent’s population. The art-wrapped boxes seem to be doing their job as graffiti deterrents as well, with minimal incidents of tagging over the past year, which have been easily cleaned off the vinyl surface.

Plans are in the works to complete a third round of the project in 2019. A “call to artists” is currently active and artists are invited to submit their qualifications. The opportunity is open to artists residing in Washington State and working in any medium. Up to eight artists will be selected. The deadline to apply is May 31. More information can be found at KentWA.gov.

Be on the lookout for more traffic-stopping art along Kent streets!